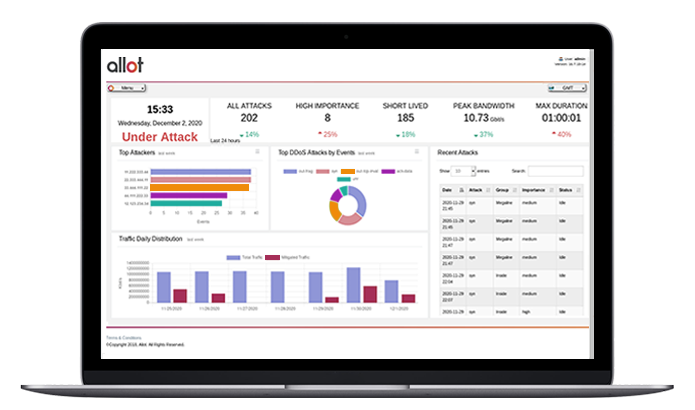 Cyberattacks in today’s digital world are on the rise, posing a significant risk to business reputation, continuity, and revenue.

Protects continuity and reputation
Mitigates DDoS attacks within seconds and keeps firewalls, routers, and servers up and running during attack.

IT efficiency & reduced security OPEX
IT can use detailed attack forensics and analytics to treat the root cause of misbehaving endpoints.

Helps you detect and surgically block Denial of Service (DoS/DDoS) attacks within seconds before they can threaten or disrupt your network service. Allot’s advanced Network Behavior Anomaly Detection (NBAD) technology identifies volumetric attacks by the anomalies they cause in the normally time-invariant behavior of Layer 3 and Layer 4 packet rate statistics. DDoS Secure for Enterprise inspects every packet on your network to ensure that no threat goes undetected. Dynamic creation of mitigation rules and surgical filtering of attack packets help you avoid over-blocking and allow legitimate traffic to flow unimpeded, keeping your business online and always protected.

Visibility and root cause analysis

Real-time alerts notify you when a threat is detected and when it has been mitigated. Infected devices also trigger notifications. DDoS Secure for Enterprise supplies detailed and customizable attack-mitigation logs, event analytics, host infection analytics, attack root cause reports, and trend/distribution reports to support your security planning, threat management, and operational decisions. A unified management dashboard monitors network and user activity and manages threat protection across your entire network.

Software based solution, which can be deployed either as a virtual edition (VE) over a VMware or OpenStack NFV infrastructure, or on COTS hardware or integrated in the Allot Enterprise portfolio (ACG-2000, Secure Service Gateway (SSG), or Service Gateway (SG)). This tight integration enables unlimited scalability and cost-efficient deployment in enterprise network. Allot’s high-performance platforms monitor all network traffic and steer only the relevant flows to the security services, while a unified management console monitors and manages web security services for all customers across your entire network.